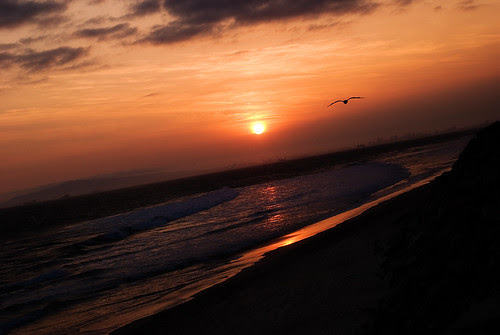 There were clouds in the sky this evening. Not the most abnormal thing you've ever heard of, I'm sure, but it sort of is for these beach cities. The clouds just don't hang around for long what with the wind and all.

When I saw the sun begin sinking towards the Pacific, I thought I might be in for a treat and, well, it's been a while since I've gone running off to chase a sunset.

Although it was pretty and the walk refreshing... it wasn't quite what I'd hoped for. I hung around for a while, then jumped back in the car. Truth be told, there was a maple donut at home that I had been daydreaming about All. Freaking. Day. I kid you not. So, let's just state the obvious here and get it out in the open. I missed a day of Project 365. Not even a week in and I've missed a day. Well, I've been working a lot. And I've been fairly obsessed with getting this here blog moved (you did notice the move, right?) and, finally, at ten-thirty last night, I realized I was missing something.

If it makes you feel any better, I did grab my camera. And I wandered around my apartment, hoping something would spark my interest. I almost took a picture of my work area where "work area" equals the ironing board I pull up to the end of the bed so I can sit and watch TV as I work on my laptop. I thought it was amusing, but... sometimes that stuff doesn't translate.

I took some more pictures of the cats.

I took a picture of my ice cream, thinking maybe it would spark conversation about our nightly habits and/or rituals. For example, I can't go to bed without a bowl of vanilla ice cream sprinkled with chocolate chips. (Although, after the amazing donut I had for dinner, I'll probably skip the ice cream tonight. I said "probably," not definitely.) At least, that's the current dessert obsession. (And my current breakfast obsession? Oatmeal with brown sugar and a piece of dry wheat toast spread with strawberry jam. But it has to be homemade oatmeal... like, on a pot, not from a packet.) (I don't know why I think you want to know this stuff.)

After I was done taking all these half-assed pictures, I knew I wouldn't post them. They were lame. And I'd rather miss a day than post junk.

Tomorrow is my last day of work for the week. I have my appointment Thursday morning and when I get home, I'm going to nap like no one has ever napped before. It will be the nap by which all future naps are judged... and found lacking. I may not get out of bed until The Husband gets home from work and that's only 'cause he's loud and inconsiderate of people when they're sleeping. (No, not really, but actually... he sorta is.)

And about this whole WordPress thing? Well... I think we'll be very happy here.