Five. Not a party you'd want to attend.

1. I'm feeling sorry for myself tonight. Couple weeks ago I went and did something, well... pretty fucking stupid. It was what prompted my "no more mistakes" resolution. Miraculously, I emerged practically unscathed! I was feeling all mature and grown up having come out with nary a scratch to show for my stumble and decided, what the hell! Let's take a risk and do it all over again! Let's make life REALLY INTERESTING! Turns out, you only get away with making some mistakes once. The second time? You get to pay for them. Life's funny that way.

2. Speaking of which... I was officially divorced as of December 30th. Oddly enough, there are no tangible differences that come with finally being divorced. However, you know that sensation you get when a common word suddenly loses all meaning? Yeah. That. Divorced. How strange. Ironically (or not), my new status has nothing at all to do with this evening's pity party. No, despite past fears and indecisiveness, I feel more strongly than ever that I made the right decision.

3. FYI, this divorce took nearly TWO YEARS. My attorney said if I had wanted things expedited, I should have thought about paying her. My mom can be a real smartass sometimes.

4. I read some books last year. 157 to be exact. BECAUSE I HAVE NO LIFE. I thought to display said books like I've done in years past, then I realized that doing so would probably require me to add some sort of "content warning" because just about EVERY SINGLE BOOK I READ was intended for a mature audience. Anyway, my point is this: reading 157 books was incredibly detrimental to my finances (because I purchased 98% of them) and I must be stopped. I need a good, swift kick in the ass. (For more reasons than one, apparently.)

5. Have you ever spent the better part of an hour writing something just to accidentally delete it? It's a horrible feeling. I should know because it happened to me just thirty minutes ago. And since I spent the last thirty- no, twenty-five minutes (I spent five minutes denying it had really happened) trying to remember all of the nonsense I had previously spewed (minus one first paragraph which I still had saved to my virtual clipboard) I now don't have the energy or interest in trying to remember what my #5 would have been. Let's all just pretend it was something totally clever and insightful and call it a night.
4 comments

I bet they're horse people. 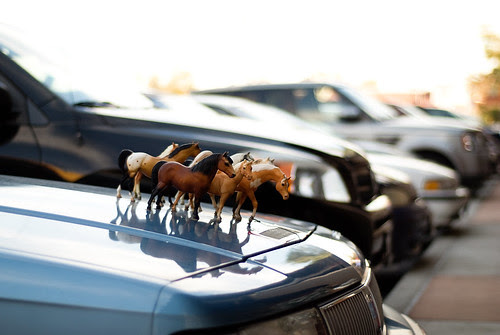 (I found this little treat on my memory card and it was like Christmas morning all over again.)
3 comments