Today was one of those days. You know the kind. The kind that sucks? Actually, now that I think about it, last night wasn't great either. Gee, I hope I'm not starting a trend.

Anyway. Without sharing too many of the miserable details, I'll tell you that it left me feeling very sad and overwhelmed and frustrated. And exhausted. (Exhausted. Something I've become all too familiar with in the last few months. Seriously. I have no idea what my future holds, but I'm not sure I have the energy for it.)

As I was getting dressed for the day and feeling all sorry for myself and thinking of all the drastic ways in which I could immediately improve my situation, I did what I've been doing for the last ten years. Ran to The Husband. (Hold your rants, people. That's what the comments are for.) (And, rory? I swear to God, if I have to clean your brain matter off the wall AGAIN, I'm going to be PISSED.)

I don't mean literally. I gave up the fight. I decided to hell with it. If asking The Husband to see Phantom with me will make feel good for a few hours, then that's what I was going to do. After an awesome night and an even better morning (she said with sarcasm), I wanted to go with someone who knew me. Who, despite what you might think, still cares for me. Someone with whom I could feel normal.

That might not make sense to you (after all that's happened), but there it is. Being around him takes me back to happy and comfortable and peaceful. And, for one night, I wanted that again. SO SUE ME. Or yell at me. Or tell me how big a mistake it is. Do what you must. But, unless I'm mistaken, you also continue to tell me to do what's best for me and asking him to go was just that.

So, I texted him. "You have plans this Friday?" I asked.

OF COURSE HE DOES! And he didn't commit to just one event. Oh no. The social butterfly has TWO prior engagements. Important ones. Including his Godson's birthday. Naturally.

Not sure if this will soften you at all where The Husband is concerned, but without even knowing what my plans entail, he asked, "Do I need to get out of anything?"

I wanted to scream YES! and beg that he drop everything so that I could have a familiar face in the seat next to me. But I couldn't live with myself if I did so. I can't insist he cancel his plans to spend the evening with me just 'cause I'm emotional and needy. (Can I?)

The fact (at least, as it stands today) is that The Husband wants to get back together. And I'm not sure what I want. I'm not going to ask him to cancel plans with his very good friends when I'm not sure what part I'll be playing in his future. (If at all.) I'm not comfortable doing anything that might give an impression I'm not ready to give.

So, The Husband is out.

And that means one thing. I'm going to get stuck taking family. I hope you people are happy.

{Update: I have a question for you. Some people have rather, um... strong opinions about what I should and shouldn't be doing as far as my husband is concerned and THAT'S OKAY. However, the fact remains that I'm going to do whatever I want. (It's my party and all that.) And I'm probably going to fuck up along the way and you know what? THAT'S OKAY, TOO. With that being said, I need to know... would you rather I just stop talking about it? I mean, I know it's MY BLOG blah blah blah and I can write what I want, but I'd hate to be responsible for everyone's head exploding. Thoughts? }
30 comments

This is why it's important to nurture your friendships.

Several months ago I bought two tickets to see the Phantom of the Opera. It was my big “fuck you” to the world. Or, more accurately, my husband. ‘Cause he’d never have let me spend the money. Lucky for me, I was suddenly free to flush my finances down the drain one impulsive and unnecessary purchase at a time.

(Yes, I was mad. And I bought opera tickets. I’m a total rebel.)

After I bought the tickets, I contemplated who I’d bring along. Naturally, my first choice would be a smokin’ hot Tom Brady look-alike. (But, like, three haircuts ago.) However, I quickly realized that pursuing any type of relationship with any type of man was just too much effort. (I don’t think this will change any time soon.) (Because men are kinda dumb.) (Cute... but dumb.)

Can I tell you a secret? I want to take my husband to see Phantom with me next week. Yes, I want to give him one of the very same tickets I bought with my middle finger up in the air. The same one that was directed right at him. And I know what you’re thinking. OH MY GOD, SHE’S GOING TO GIVE HIM ANOTHER CHANCE.

And to that I say, MAYBE I WILL. (I refuse to be afraid of you and your strong opinions.)

Although, first I’d have to get over the fear or him saying “Um, I think I changed my mind” and tell me how he doesn’t really want to be married anymore after all. ‘Cause, you know, that'd be JUST LIKE HIM.

Why?! Why do I want to take him? Aside from the obvious reasons (I miss him. It'd be fun. For ten years he was my OTHER HALF, of course I want to take him!) (oh, and let's not forget that I insist on making the same mistakes over and over again) what could possibly make me think that this is a good idea?

Let's face it. The chances of us staying married and having a successful relationship are really... very... not good. But is there a chance we could be friends? This is the question that torments me. I have no friends. Despite what we've been through, The Husband is my closest friend. And has been for ten years. I can't help but want to try and salvage that. I mean, why not? Crazier things have happened. Right?

Then again, I remember how I felt when, after months of "dating," of putting in an effort to salvage our relationship, of thinking we both wanted the same thing, he said "nothing has changed" and he still "wasn't sure" if he wanted to be "married." I felt "embarrassed." Humiliated, even. So much that I vowed to abuse "quotation" marks for the rest of my "life."

I wouldn't wish that experience or those feelings on anyone. Not even my husband. So, is it fair to spend time with him in a "friends only" capacity while I'm still unsure if I have the energy that staying together would require? And, believe me, it would require a lot. Like, I can't even think about it without needing a nap.

Someone said to me recently, "If you don't know what to do, the best thing to do is nothing at all." At first this made no sense to me. What do you mean DO NOTHING? There's a little voice in my brain that jabbers on at me constantly throughout each and every day. It tells me to make a decision! make it now! make the right one! don't fuck up this time!

But when I gave it some thought, I wondered if this idea to "do nothing" didn't have some merit. Maybe if I just wash my hands of the whole thing (at least temporarily) and continue to live my life focusing on, you know, myself I'll eventually realize which decision I'm meant to make.

But until then, who the hell am I supposed to take with me on Saturday? Tick tock, people! I have less than a week to decide. And, well, less than that if I want to give them any notice.
25 comments

I slept in late. I was working the swing shift at the time and had gotten in the habit of going to bed late and waking up really late. I had an appointment so I didn't bother turning on the television when I woke up. No one was home. The house was quiet. I had just turned 19 a few days before.

I dressed and left the house. I turned on the radio, but there was no music to be heard. They kept talking about something (Something has happened! Horrible! Tragic! Something!), but I didn't know what. I was curious, but, I admit, detached.

It was the same at the doctor's office. The atmosphere was subdued. The radio was on. I still had no idea.

I didn't find out until I returned home. My dad had come home early; he had every television in the house turned on and tuned to the news. And what they said was true. It was horrible. It was tragic. And it was so many other things.

It's September 11th. People all over the world are talking about it. Some of them are even blogging about it. I had no plans to do the same, but last night I came home to find my mother watching 9/11 footage on YouTube and the impact of what had happened was just as strong as it was nine years ago.

It got me thinking. All day I've been thinking about how much life has changed since. My problems are trivial in comparison to the horror that so many people experience that day. But, despite tragedy, life continues. The good and the bad. We struggle, we fight, we complain, we get frustrated, stressed out, and want to throw our hands up and scream "I quit!"

But sometimes it's important to take a step back, take a deep breath, and have a little perspective.

Now I will quit eating forever. 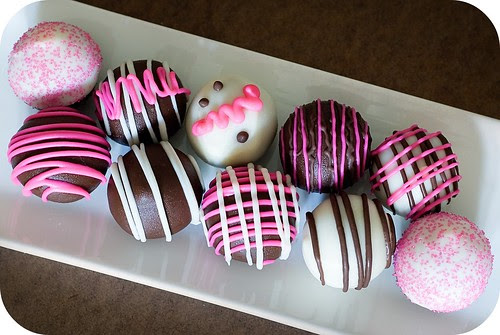 I love pink. (Maybe you guessed.) I have a friend who hates the color and makes a horrific retching sound every time I mention it. Whatever. Pink is awesome. So are cake balls. It was a very lovely birthday, you know, despite. It was quiet. Me. An empty kitchen. Cake balls. The Food Network on in the background. It ended with an amazing dinner during which I overdosed on thick slices of warm garlic bread drenched in olive oil and one of the best pasta dishes I've ever had. Carb. Overload. Oh, and wine. (Which is, you know, also awesome.)