This is a problem.

This is what my NaNoWriMo profile looked like last night. 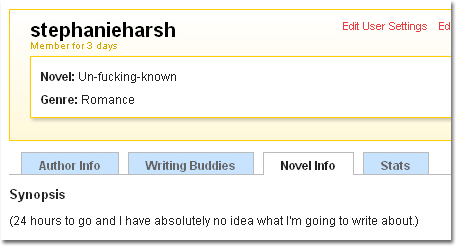 Unfortunately, it still looks like that. I think this whole NaNoWriMo thing kicks off in, like, two hours. And, naturally, I've decided to become painfully obsessed with the appearance of this fucking place. Why? Why can't I be a normal person and settle on a template and then- oh, I don't know- MOVE THE FUCK ALONG. (I wonder what a psychologist would say. Daddy issues always seem to be a common scapegoat.) Anyway, when I get home, I'm going to write my ass off. About what? I'm still not sure. But, peeps? There will be words. Oh, yes. There will be words.

Goodbye forever. Or, at least until December. Or, you know, until I give up.
1 comment

1. I got the coolest opportunity to help design a real, live author's personal blog. I'm going to tell you all about it just as soon as I sit and finish that post. But, yeah. It made my fucking year.

2. I'm doing NaNoWriMo. I thought I was agreeing to NaBloPoMo and I thought, what the hell. I tried once and was a miserable failure, but, sure, I can do this. Then I realized that, stupid me, I agreed to NaNoWriMo. Which means I've committed to writing AN ENTIRE NOVEL IN ONE MONTH. So, see you not at all during the month of November.

3. IT'S ALMOST NOVEMBER. Are you freaking kidding me?!

4. My brother graduated from boot camp a few days ago. Now he's a sailor. For the fucking Navy. More on this later, but, dude, I'm like a proud papa. Or, you know, the female equivalent. ("Proud mama" doesn't sound as good.)

5. I've pretty much taken the blog here public. By public, I mean I've linked to it on a couple of my public profiles. I'm pretty sure this is a bad idea- I mean, the last time I went public, I had to move and that wasn't fun for anyone- but I'm tired of hiding. (I promise, no more moves. Ever.) With that being said, I'm also going to start importing my old posts. The trip down memory lane will be either fun or depressing as hell. We'll see.

This is going to make reading more difficult. 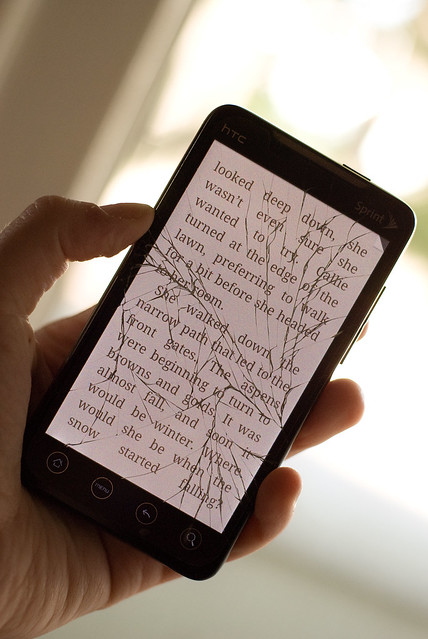 Not to mention, you know, USING MY PHONE IN GENERAL.

I know what you're thinking. This wouldn't have happened to a real book.
8 comments

Of music and stalkers.

My mom came into my room one morning blathering on about God-only-knows like she does when I've just woken up and she has me at a disadvantage. (I am not a morning person. It takes a significant amount of time for me to get from opening my eyes to actually getting out of bed. During this time, I have no choice but to listen.)

She pouted and walked away. Not five minutes later, Adele's Rolling In The Deep began reverberating throughout the house. I thought it was The Big One. My mother... she will not be deterred.

I've been on a country music kick lately. Blame it on Jake Owen. It all spiraled out of control after I heard Barefoot Blue Jean Night on the radio. I liked it so much I downloaded the album. It's pretty much been on repeat for the last three weeks. (That voice of his... wow.) I even started stalking him on Twitter. (This is so not something I'm proud of.)

I've got the house to myself tonight and I've spent the last three hours watching music videos on YouTube. It started spilling over onto my Facebook page and, well, it seemed only natural to drag some of it in here and let everyone wallow in the feelgoodness of these songs. Have a listen. Or not. I hate to be forced; I'm certainly not gonna force you.

(But seriously, if you listen to any of them, listen to the last. Will Hoge. He'll give you chills. In the best possible way.)

Something. I'm just not sure what.

I know what my problem is. I have no niche. My other problem? At 29, I still don't know how to say "niche." (Guess I should've added that to my list.) Is it neesh? Or nish? Or nitch? (No, really, I'd like to know 'cause it's totally one of those words I refrain from using so I don't look like a complete dumbass.) (Is "dumbass" one word or two? Shit.) So, I have no niche. I don't know what the hell I'm doing here. I know I want to continue blogging (maybe even more regularly) (don't hold your breath) but about what? Everything I think of seems so... dull. Granted, the things I wrote about back in the day were dull, too. (Back in the day = pre-divorce.) But I was content back in the day. I'm not content now. I'm bored. Fuck, am I ever bored. I need a change. (In more ways than one, apparently.)
11 comments