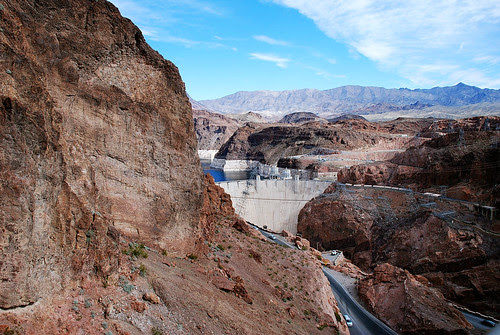 Yes, an adventure. And one I took all by myself. Which isn't saying much except that I lost cell coverage during most of it so obviously it was extremely dangerous.

Last Sunday I was on my way home from visiting my sister when I decided to detour to Lake Mead. On all the drives to and from my sister's home in Utah, during all the visits to Vegas, I had never once seen Lake Mead. It didn't look like it was too far out of the way so what the hell? That's my motto most days. What the hell. It's the more sarcastic and disinterested version of "you only live once."

What was supposed to be a "quick" detour to visit a lake turned into a four hour drive through a state park, then a national park, a visit to the lake, and, finally, a stop at Hoover Dam. None of which I'd ever seen before.

I was posting (less than stellar) photos on Facebook along the way. And no one seemed to care. And when I say "no one" I mean my mother. My mother didn't care! Her daughter- who, sure, may be thirty, but still!- was driving alone through the wilderness! With no cell coverage! And a car that was in desperate need of new brakes! (The brakes thing might have been my own fault and has since been rectified, I'm happy to report.)

When I brought it up and asked how she could possibly not care about the harm that could befall her (30-year-old) baby in the wild, she argued that my Facebook posts hadn't been clear. And when I explained in more detail about just what an adventure I had been on, she replied with, "wow, how boring."

My mother would only survive the same adventure if someone else were driving and she were able keep Facebook-ing. (No, seriously, that's what she does now. She sits in the passenger seat with her laptop on her, well, lap and Facebooks.) I, on the otherhand, enjoyed the peace of (at times) being the only person around for miles with only Mumford & Sons to keep me company. (If I'd gone on the same adventure a month ago, my only company would have been Taylor Swift.)

I arrived home that night after driving for what felt like forever but was really only 10 hours. (10 hours!) I was in a weird state of exhaustion where my body was in desperate need of sleep while my mind was wide awake and ready to tell whomever would listen all about my adventure. Unfortunately, I think I'm the only one who really considered it an "adventure" at all. Apparently, to the masses, I did some sight-seeing on my way home NO BIG DEAL.

And honest? It really wasn't a big deal. Except that it was probably the first real spontaneous thing I've done alone and just for me since you know. And my mom and I aren't very similar and I had a blast. The end.
6 comments