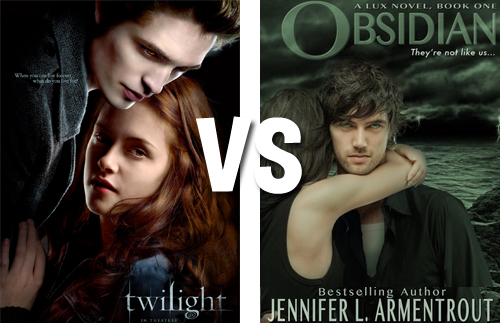 I've been thinking about Twilight a lot lately. Mostly because I put my big, huge Edward poster in my trunk to be taken to Goodwill. Yes, really. Except I'm kinda embarrassed to even take it to Goodwill and have to actually hand it over to a real, live human so it's just been sitting in my trunk for, like, three weeks. Maybe longer.

Anyway. Last night... or, technically, this morning... I stayed up reading. Until nearly six a.m.. I was reading Obsidian. When I started it a couple days ago (the first 30% was kinda slow hence "a couple days ago") (and, yes, I think in percentages) (thanks Kindle!) I very quickly saw similarities to Twilight. Except instead of vampires, aliens. Yes, aliens.

Edward is an alien and his name is really Daemon Black and he's super hot and also kind of an asshole but with the quick wit to actually pull it off (unlike in Twilight where he would brood a lot and mostly stay silent). I love Daemon. Oh, and Bella? I mean Katy? (Her name is Katy now.) She's BAD. ASS. She stands up for herself and tells Edward Daemon where he can go and makes interesting gestures (of the one-finger variety) when he's being a prick. And she blogs. About books. And did I mention I'm in love?

Despite my nocturnal reading frenzy, I did not finish the book until my sister woke me up just four short hours after finally succumbing to sleep. As soon as I was done, I went to download book two. Except I was quickly informed that book two HADN'T BEEN PUBLISHED YET and wouldn't be for another TWO MONTHS. (And did I mention I hate waiting?) I was all sorts of frustrated.

So then I went to Goodreads. 'Cause I add all my books to Goodreads. I love Goodreads. It's everything I used to love about book stores (remember those?) without having to get dressed and leave the house and, you know, talk to people. Unless you want to. I lose big chunks of time on Goodreads.

I pulled up Obsidian and added it to my "2012" shelf and did all the other things I do to keep obsessively meticulous records of my books (because I'm a freak) and then I stopped and just stared at the stars. 4 stars? 5 starts? I didn't know. I really liked Obsidian but did I think it was amazing? No. But in comparison to Twilight? I don't even know how to answer that! There were things about Obsidian that I liked more... but I love love loved Twilight. Didn't I?

Truth is I'm starting to forget what it is I loved about it. And who's to say I wouldn't like this new series better if all the books were already written and readily available? Is how a person feels about one book impacted by the whole of the series? When I joined Goodreads, I had already read the entire Twilight series. I added them and gave each 5 stars because HELLO?! IT'S TWILIGHT. But what if I had read the books after joining and had rated them one at a time as I finished? I can't help but wonder if my ratings for each book would be different today.

Peeps, you may be sitting there thinking to yourself that I've gone and gotten all panties-in-a-twist about something NOT AT ALL important, but to you I ask one question: have you underestimated my utter infatuation with all things Twilight? Do you need to go scroll through the archives to reacquaint yourself with the obsession? (Yes, I realize that was two questions.) This whole Obsidian vs. Twilight thing is keeping me up at night and making me question MY VERY EXISTENCE. No, not really, but it's close!