I know, I know. You want to hear all about my trip to San Antonio. Well, keep your pants on. I'm not ready yet.

First I need your help. You see, I have a friend. (I know, shocking.) His name is Jack. Jack is vegan. (Is "vegan" supposed to be capitalized?) Jack wanted me to try this vegetarian Vietnamese restaurant. Not really my first choice, but sure, why the hell not?

We should have walked out as soon as that little, tiny worm fell out of Jack's silverware. How he convinced me to stay and actually eat something, I'm still not sure. Apparently, I have no standards.

We ordered several different plates to share. One was a salad. It was gorgeous. Plenty of fresh, crunchy veggies. A tangy dressing. The Fritos garnish was interesting, but hey, I love chips as much as the next person.(Maybe more. I really love chips.)

But, in addition to the veggies and the Fritos, there was something else. Something white and chewy with curled edges similar to those on a lasagna noodle. The texture, not like a lasagna noodle, was so, so wrong. I wanted to spit it out. I forced myself to swallow.

"What is that?!" I asked Jack in horror.

"Relax!" he said in a low voice, glancing around to make sure no one was witness to my disgust. "It's a vegetarian salad. It's probably, I don't know, a flower or... something."

He looked a bit worried. It was probably the worm that did it. I mean, worms in the silverware? God knows what you might find in the food. (I can't believe we ate there.)

Jack stopped our server as she walked past our table. He asked her what it was. I don't think she knew the answer either. She was young, just a teenager. It was a family restaurant. You could tell she'd rather be anywhere else but there.

She walked away and Jack and I just stared at each other.

"Did she just say vegetarian cow stomach?" I finally asked.

"I don't think she knows what she's talking about."

"Then what the hell are we eating?"

Jack looked ill. "I'm not sure I want to know." 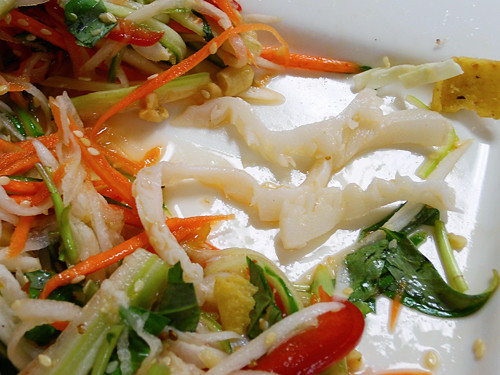 I know. I don't post a picture in years and when I finally do, it's of a half-eaten plate of food.

But, please, I'm begging you, tell me what those white tentacle-looking things are.