Not to be confused with Skywalker.

I'd like to introduce you to someone. This is Luke. 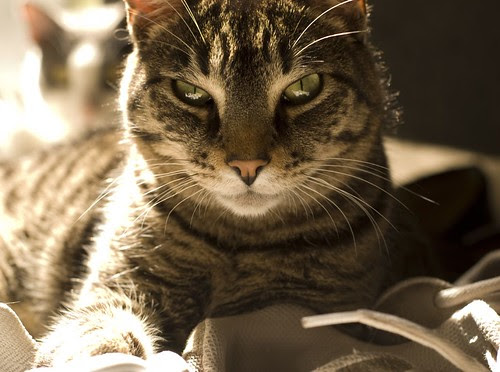 And he was not named after the Star Wars character, thank you very much. (Fact: I only just watched the Star Wars series a year ago. And... they weren't bad.)

Luke and I were meant to be together. He was the last of a litter (the runt, too) that I found advertised in a local paper. When I arrived to pick him up, he was behind a sofa, hiding from two terrorist children. Their mother seemed disinterested, just wanted this last nuisance out of the house and I wasn't leaving him behind.

On the way home, he slept in my lap. I was in love. While he was small, he would find random places to sleep; on shelves behind picture frames, in the entertainment center. Now, he often sleeps here, on our shoes: 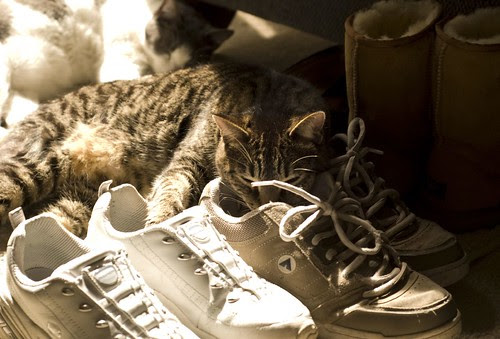 He talks a lot, especially when he wants treats. And he still looks for warm, available laps. He is so super cuddly and lovable.

The Husband and I are animal lovers for sure, but we live in an apartment and it wouldn't be fair for us to try and house a bunch of pets. We're happy with our two "kids" right now. (Yes, Luke has a brother from another mother. Actually, a sister, but "sister" doesn't sound quite right in that sentence. I've ruined it now, haven't I?)

It always surprises me how often I hear people say they don't like cats, or they're "dog people." Cats (okay, some cats) have such amazing personalities. Sure, I'd love to have dogs and turtles and pigs, but I wouldn't give my cats up for the world.