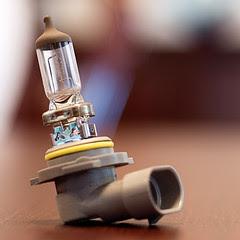 I don't know what went wrong while I was growing up, but I do not know cars. Like, at all. Like, I didn't even know I was supposed to get a regular oil change until I was twenty and my car broke down.

Maybe it's 'cause my dad wasn't around (I know what you're thinking. Daddy issues. That explains everything.) or maybe it was just the plain and simple fact that I didn't even have car until shortly before I moved out so there was no point in teaching me anyway... whatever the case, I don't know cars.

My mom... my mom doesn't know cars either. Right after I moved in with her, I mentioned I had a slow leak in one of my rear tires and needed air. I had never done that before (I DON'T KNOW CARS) and my mom said, "It's easy! I'll show you! Let's go!" She showed me how to fill them... later her husband showed me how to release the extra fifteen pounds of pressure.

My mother and I both learned something that day.

When my headlight went out, I didn't even notice until someone said, "You're headlight is out." I had no idea. Later, I asked, "Why isn't there an indicator in the car when a headlight burns out?" Because most people are much more observant than me, apparently.

I assumed this would be a much more painful experience than it actually was. All it took was a quick trip to the auto parts store, eleven bucks, and my dad saying, "See this here? Turn it. Pull it out. There's the bulb. Now replace it." I was in awe.

Of course, I'm in awe of anyone who knows how to fix anything on a car. Which is pretty much all men. 'Cause I'm fairly certain they were born with a car manual for a brain. God, that would explain so much.