In case you live under a rock, football season is well under way.

And that reminds me. Remember the gift? The one that I never revealed after making you guess what it might be? It was a jersey. A Tom Brady jersey. I had grand plans for taking a picture, but never got around to it. I’m sorry. (By the way, Alias Mother, I’m thinking you need to start trusting your instincts.)

Now let’s all pause for a moment to appreciate the beauty that is Tom Brady. 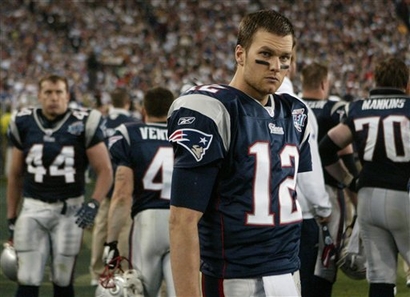 He makes me want to be a sports photographer. Except that I’m afraid of huge football players crashing into me. I have terrible reflexes and when something comes barreling at me, I freeze with a horrified look on my face and brace for impact. Seriously. Throw a ball at my head. I won’t duck.

I’ve been working most Sundays as of late and I have mixed feelings about this. During past football seasons, I’d sit on the sofa, close to The Husband, and read or flip open the laptop while having to occasionally appear interested in whatever play had my husband bouncing off the walls. I can’t tell you how many times I’ve heard “Honey, look!” just to glance at the television to watch a group of giants in various colors running all willy-nilly over a field.

On the one hand… sports? Meh.

On the other hand, his excitement is contagious and sometimes football really is exhilarating.

On the third hand, I admit I’m kind of happy to be at work while he goes a little insane watching his team go three and oh to start the season. He invites a couple of guys over, they drink beer and bump chests to their hearts content.

Yesterday, his Vikings played an exciting game. I caught the last two minutes while I was on lunch and even I got caught up in the excitement and anxiety. Although, the anxiety stems more from what I may have to deal with when I get home if they lose.

This morning, The Husband forwarded me an e-mail written by a friend of his. I may have to ask said friend to become a guest blogger, because this made me laugh.

In case you don't know, Jon has the 40 yard dash time of a gazelle. Let me paint you a little picture from a first-hand account:

San Francisco scores their touchdown to go ahead in the 4th quarter. At this point, Jon is not happy, not happy at all, but the man has faith as text messages begin rolling in from either a, San Francisco fans or b, haters.

So, the Vikes get the ball and Jon thinks he has a chance. But then they’re forced to punt and S.F. gets the ball back with a few minutes left. Of course, knowing the game, Jon realizes he has three time-outs and if he can just get a three and out, he has a chance. It may be slim, but it’s Brett Favre, damnit!

Meanwhile, he is receiving some weird text messages from Aram regarding how football strategy works (trying a field goal from their own 45? Really?) which were so far off I thought Aram may have been watching Rugby or Cricket. Seriously, I couldn’t make this stuff up.

So, the Niner’s do go three and out and Jon’s eyes light up like a menorah on Hanukah even though he only has 1:47 left on the clock and he’s on his own 30 yard line.

This is where the text messages really get fun, as some people start telling him to “lose with dignity” and such things. (Play all sixty minutes, then talk. Seriously, eating crow blows ass.)

In the meantime, Favre is putting together the drive of any Minnesota fan’s life. (Seriously, Tavaris or Sage would never have pulled it off.)

As the clock runs down, I see the hope in Jon’s eyes beginning to fade until Favre pulls off the tightest “freakin’ laser beam” of a pass I’ve ever seen to the back of the end zone (except maybe Big Ben’s in the Super Bowl last year) and it’s caught for the game winner.

As this happens, Jon doesn’t say a word… He remains resilient to accept what may have just happened, he’s stoic, and quiet as a baby sleeping on his mother’s chest after a serious breast feeding session.

But this, my friends, was the calm before the storm… or Hurricane, shall I say? He gets so quiet as it goes under review. As he watches the replay I can see the heart rate accelerate and the excitement grow back into his eyes (the crazy man stare) and I prepare myself for the spectacle I am about to witness.

The referee comes onto the field: “After further review, the call on the field stands. Touchdown”

This is where Jon goes full speed from his living room into his bedroom and back again in less than 2.7 seconds. As he comes back around the corner he sees me and all I can think is oh, shit… this may hurt. I get dive-bombed on the couch. A cell phone goes flying across the room, bounces off a couch and nails a cat. There’s purple and gold flying everywhere and my hand is beginning to bleed from high fives. At which point I begin to wonder… if Jon is this happy, how the hell does Aram feel?

Honestly, half of it is like trying to read a another language. But I do know this: football season is stressful, exciting, and sometimes dangerous. But better him than me.