Lately, I've been so afraid of being cold that I overdress. And then overheat. It's becoming a serious problem.

See, our apartment doesn't get any sun, which I suppose is great during the hot summer months, but not so much in the winter. In the winter, I freeze. I have space heaters strategically placed all around the apartment... one under my desk, in my closet, next to the sofa to warm my tosies while I'm watching TV.

In the winter my closet turns into an icebox and it becomes absolutely painful to change clothes. In the winter I'm always wishing for heated floors and toilet seats. A towel warmer. And a central heating system THAT WORKS. (Because the one that was installed 40 years ago is crap.)

Now that it's summer, our apartment has been a lot warmer. I still wear sweatshirts most of the time, but it's much more comfortable. My problem starts when I go to get dressed to leave. Take yesterday, for example. I decided to take a walk down to the fairgrounds. The Orange County Fair opens on Friday and since we live just blocks away, we always get to see them erecting the rides and games and stages. I wanted to get a peak, maybe a picture, so I got dressed for a stroll.

As I left the house in jeans, a tee shirt, and sweatshirt, I was comfortable.

When I got to the fairgrounds, I was hot and miserable.

So hot and miserable, in fact, that I had lost most interest in taking pictures which is why this one totally sucks. 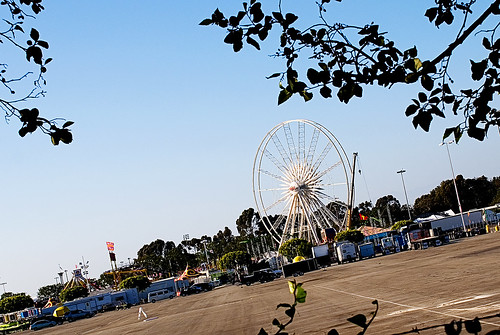 But there's the giant Ferris wheel. Well, most of it.

Carnival rides really scare the doodie out of me. The only two I'll go on are the Ferris wheel (called "Le Grande Wheel") (I don't get it either) and the People Mover. You know that thing that has seats and takes you up high and slowly moves you from one end of the fair to the other? Yeah, that.

And both of these rides turn me into a mass of trembling nerves. But the thought and possibility of plunging to one's death is sort of thrilling. Or something. My husband and sister go on rides that flip you up and down and upside down and around and around all while hanging hundreds of feet up in the air until someone ralphs. They think it's awesome. I think they're nuts.

I also personally think it takes more than a week to build rides and make them safe. But that's just me. I'll stick with the exhilarating People Mover.

Here are the top ten six reasons I'm excited for the fair:

Caramel apples. Last year we found the most amazing caramel apples. They're huge and dipped in caramel and then chocolate and then candy. And there are all sorts of crazy, wonderful, hip-expanding combinations. They're fantastic. I've been dreaming of them since last year.

Fried avocado. Wait. Fried EVERYTHING. Amen. (And, holy Godiva, I just found out they'll have DEEP FRIED S'MORES this year.)

The hypnotist. 'Cause it's awesome watching people act like complete lunatics. (And, no, you will never see me volunteer for this.)

The smell of barbecue and corn on the cob. Maybe I'll actually eat some this year.

The games. Ridiculously expensive and probably fixed games that'll win me a five cent stuffed animal that I'll later throw away because, oh yeah, I'M NOT FIVE. And watching my sucker husband try to guess his pitching speed is always fun.

So... how do you feel about deep fried everything?