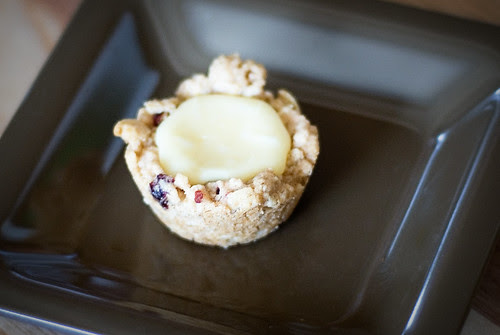 A few days ago, I was on the phone with my older sister and she sent me packing on a guilt trip that only a mother can accomplish.

She said, “Go bake something.”

To which I began screaming maniacally about my ever-expanding hips.

Then she said, “Every time you post pictures of something you’ve made, your nieces and nephews get a yummy treat. How can you deprive them?”

I called her a dirty word and hung up on her. 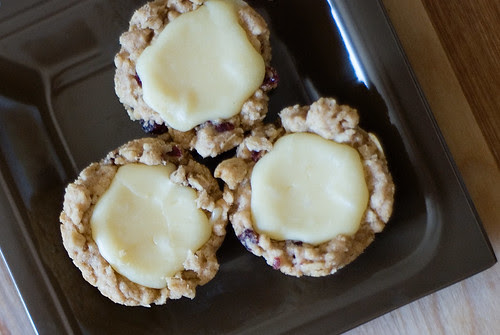 No, not really. But she wouldn’t let me change the subject. I had been wanting to make fudge (I had grand ideas about a swirling chocolate and peanut butter fudge), but I didn’t have all the ingredients I’d need and I wasn’t about to spend a small fortune at the store just so I could make fudge to take pictures of so my nieces and nephews could have a treat. I don’t care how cute they are. (They are pretty damn cute.)

She told me to bake something with whatever I had on hand. She said she had faith in me and then said “we’ll be waiting.” Bitch.

So, grumbling, I opened my pantry, found two bags of white chocolate chips I had forgotten about and started browsing for a recipe. Almost immediately, I stumbled upon this one. I had seen it before, had been interested before, and since I had everything I needed, I figured now was as good a time as any. 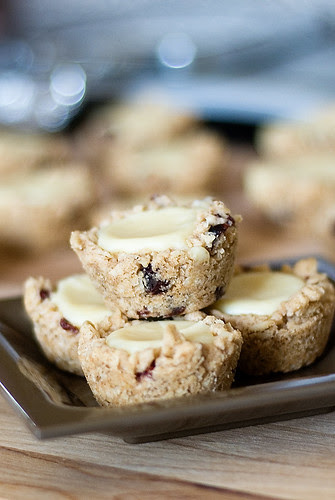 And they. Are. Were. Awesome.

I was concerned that the oat cups would be too salty. A whole teaspoon sounded extreme and when I tasted the dough, I thought, surely, it had to be a typo.

It wasn’t. But once the oat cups are filled with that sweet fudge, it totally cuts the saltiness. It’s a wonderful combination. And the cranberries? For those of you who don’t go for fruit in your desserts (you know who you are), you can hardly taste them. I’d say you could even omit them, but I think they add a little something that you wouldn’t want to take away.

They were seriously delicious. This girl? 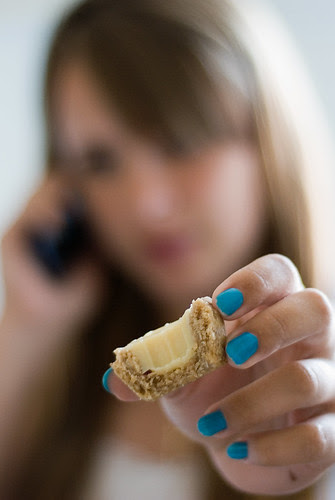 Ate more than I can remember. (Like the nail polish?) I made the mistake of baking these after I got home from my last day of work before the weekend. Which means there was no one to pass them along to the next day. Which means they sat in my fridge all weekend. Which means I continued to eat them until, fed up, I finally threw the last remaining few in the garbage. IT HAD TO BE DONE. (Don’t judge me.) (Yes, I know that’s wasteful, but sometimes a girl’s gotta do what a girl’s gotta do… especially if she’s trying to lose, or at least maintain, her weight.) (I assure you, I don’t make it a habit.)

In case you couldn’t tell, the little fudge-filled oat cups really were delicious. Although, unless I can find a way to make these that doesn’t require the tedious work of molding cups and filling them, spoonful by spoonful, I’m not sure I’ll make them again. 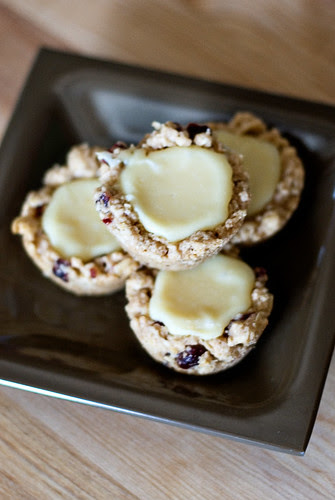 Well, let’s not get hasty.

Filling
(Note: I found that this recipe makes about 24 cups, which is perfect if you have a 24-cup mini muffin tin. I had a LOT of leftover fudge. Next time I will halve the filling recipe. But that’s just me. Please don’t yell at me if you decide to follow my lead and it turns out disastrous. Thank you.)
2 cups chopped white chocolate
1 14-ounce can sweetened condensed milk
1 tsp vanilla extract

Directions
Preheat oven to 350° and grease your mini muffin tin. (I used the spray stuff.)

Beat together the butter and brown sugar until creamy. Add the oatmeal, flour, salt, and cinnamon. Mix until combined. Add chopped cranberries and walnuts (optional) and mix until incorporated.

Drop dough by tablespoon into the prepared wells of your mini muffin tin. Using a tart press or the back of a teaspoons press down on the crust mixture until the crust is formed into a small well. (I used my fingers.) Bake for 5-6 minutes.

While crusts are baking make the fudge filling by heating the milk and chips over low heat until melted and smooth. Remove from heat and add vanilla extract.

Remove the partially baked crusts from oven (they should not be brown). If they’ve puffed up during baking, gently press them back down to form a well. (I used my fingers, burned them, and then used the back of my half-teaspoon.)

Fill each mini crust with fudge, being careful not to get any on the mini muffin tin or it will burn. Return to oven and bake for another 3-4 minutes. Remove from oven and allow to cool at room temperature. Chill for 20 minutes or until firm.

Using a sharp knife, gently pry the Fudge Cups out of the tin. They should pop out if you greased properly and the cups are firm.

(My sister... she told me to bake something. She didn't say it had to be easy.) (Printer-friendly version of the recipe.)