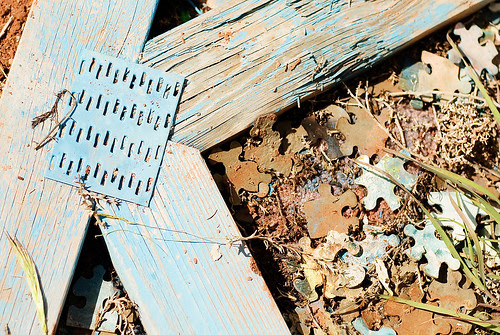 There's this huge red dirt field (also known as an "expanse of land," also known as an "expanse of red adobe desert," also known as "uncharted desert territory," also known as "raw clay land," et al., etc., ad infinitum*) behind my sister's home. I took the dog out there earlier to let her run off some energy and found this old wooden gate thing. I say "thing" because it's mostly in pieces now and I have no idea what it was before or what it may have been surrounding while it was actually standing. Anyway, scattered around it were all these puzzle pieces. It was bizarre. Someone had to go through a lot of trouble getting rid of their puzzle this way. And, I mean, no one likes a litter bug.

*My mother, sister, and I got into a very heated debate when I asked if they'd call that big expanse of land a "field." I thought it only fair to include all possible descriptions.