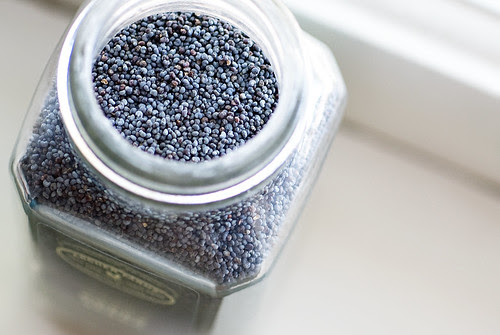 So, last week, the husband asked me to come over and take whatever else I wanted from the apartment. He's moving out. I told him there wasn't anything else I wanted, I had already packed and stored all of my stuff months and months ago. He insisted, said he'd leave a key, so I went.

I ended up with exactly two pictures, two folders of old paperwork that I'll unlikely ever need, the five canisters we bought for flour, sugar, etc... and this jar of poppy seeds. Because poppy seeds aren't exactly cheap, and, well, the husband's not gonna do anything with 'em. (If he suddenly takes up baking after we're divorced, I will kill him.)

I bought the poppy seeds shortly before I moved out. I was planning to make a bread or, I don't know, muffins. (Costco has the best poppy seed muffins, but they're, like, the size of a small house. And just as fattening.) (And, yes, I know houses aren't fattening, but you get it, right?) Still haven't gotten around to it.

Problem is, I don't exactly enjoy baking in my mother's kitchen. Which is why I haven't been. So, if anyone has any good, easy recipes, pass them along. I refuse let these sit here and go bad and be forced to eventually throw them away. I really hate that.