I was recently involved in a Breaking and Entering. And it was awesome. Although, technically, there was no "breaking" involved. J came over to keep me company while I started demolition to pack and I took her down to peek in the windows of our new apartment. I knew it'd be empty, just waiting for us to move in. I didn't know we'd find the sliding glass door wide open. We couldn't resist going in and poking around for a few minutes. Why is that feeling, that fear of getting caught, so exhilarating?

In case you live under a rock, New Moon comes out in a week. A WEEK. By this time exactly seven days from now, I could have already seen it. (Insert chorus of hallelujahs here.) I don't actually plan to until Sunday, but who knows if my control will hold out that long. And I know it's much too early to start talking about Eclipse, but what could be my all-time favorite scene from the book (possibly all books) (the tent scene for those who've read it) is in Eclipse. It has fantastic dialogue and I'm both excited and nervous about seeing it brought to life in film in June. Sometimes, some things are best left to the imagination. Actually, most things are best left to the imagination. 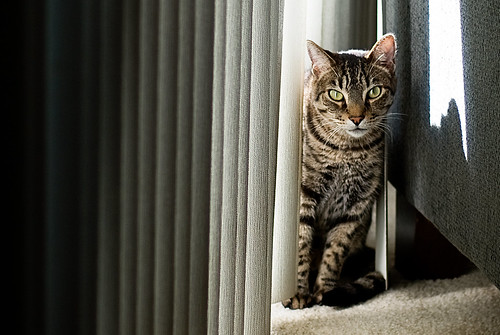 Thanks for your input on the recent litter box discussion. Aside from being helpful, I always find it interesting to hear and see what other people have come up with. I think we're leaning towards a closet as a possible location. It's going to take a bit of creativity and some hard labor, but if it works out the way I imagine it (and, sadly, most things rarely do), it's going to be spectacular! (Constructing new places for my cats to poop. This is what gets me excited.)

I bought myself a present. A new camera. I know. I'm terribly spoiled. I bought a little Nikon point-and-shoot and I got a great deal on it. (Why do I feel guilty about admitting I spent money on myself?) The fact is I don't want to carry The Beast around with me everywhere I go. I mean, I'd love to! But it's heavy and bulky and I find the thought of carrying it to work and on errands to be somewhat unrealistic and slightly frustrating. Also, I wanted something that could record video. So, maybe I'll possibly post a video here one day. Who knows. Pictures are one thing. But I can't Photoshop weird blue moles out of a video, damn it.

J used the camera to take a picture of herself flipping the bird. She's fifteen. It made me laugh. I thought about posting it but then decided it might belong with the photo of cat crap because some things just don't translate well. I mean, you wouldn't know by looking at it that she's a straight-A honor student who plays varsity soccer and just happened to be goofing off with her older sister. You might, in fact, think what the hell's wrong with you, she's fifteen! So, I sent a copy to my mom with "Thought you might like this..." in the subject line and called it a day.