The Husband and I dove right back into unpacking as soon as we got home from Utah on Saturday. Unpacking is a bitch. Seriously, I'm never moving again. (So that kid that we may or may not have one day? It sleeps in a cabinet.) And I'm never buying anything ever again, either.

It was in one of the thousands of boxes that I found a long forgotten photo album. It was so forgotten, in fact, that I didn't even think it had ever been used until I cracked it open and, surprise surprise, pictures!

There were pictures from our honeymoon in Hawaii, pictures of our first anniversary trip to Disney World, pictures of people we worked with years and years ago. And interspersed between the pictures were scraps. Mostly movie and event ticket stubs, but then I found this: 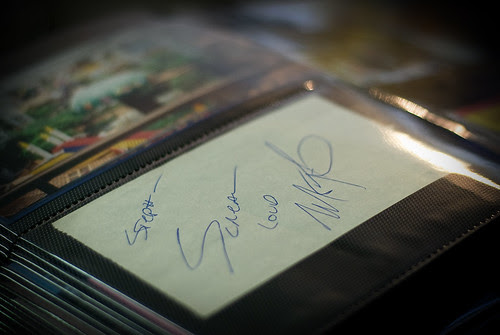 The year was 2002 (possibly 2003) and The Husband and I were living in sin on the beautiful coast of Monterey. I was a server in a hotel restaurant, both of us working for the same company we do today.

Matthew Lillard, his wife, and their newborn daughter were staying at the hotel to attend a wedding. I wouldn't say I was a huge fan of his, but Scream? Scared the absolute shit out of me. Not kidding. That fear lingered for weeks. (Hey, I was fourteen.)

And I'll always remember how his character snapped at the end of the movie and lays there crying and bleeding after having been shot.

And, holy hell, did they linger! I mean, the man was practically begging me to ask for his autograph.

Actually, the thought of approaching a celebrity, any celebrity, made me shake a bit in my shoes. No lie. But The Husband kept egging me on from across the lobby. "You'll never do it," he said, "you're too chickenshit."

Finally, after taking that first step eight hundred times just to chicken out and turn around, I finally did it. I approached. I asked. I conquered.

And he was so nice. So "go with the flow." Almost as if having someone ask for his autograph was just part of his normal everyday coffee routine. Setting down the creamer to reach for the pen and paper I held was such an easy fluid motion, it was obvious he'd done it many times before.

What I didn't anticipate was how I'd feel afterward.

I felt guilty. Extremely. I had just interrupted a man and his family... getting coffee... on their vacation! I was scum. Worse. I was ashamed of myself and immediately regretted asking and have ever since.

That feeling of regret has stayed so strong, so persistant, that it has prevented me from ever approaching another celebrity. Even Tim McGraw (TIM MCGRAW!) who, just a year ago, stayed at the hotel with Faith and the kids during a trip to Disneyland. I had the chance, but Matthew Lillard ruined me for life. All I could do was stand to the side and ogle to my heart's content while screaming "I LOVE YOU, TIM!" over and over in my head.

I realize that Matthew Lillard has absolutely no recollection of me. In his world, the only thing I amount to is a five second irritation that was immediately forgotten, but... I'll always remember and I'll always regret.

So, Matthew Lillard? If you're reading? I'm really sorry.

And Tim McGraw owes you a favor.