A little rant and ramble for your Saturday. You're welcome.

It's Saturday, Internet. Again. I'm sure many bloggers see the same trend, but I get the least amount of traffic on weekends. I like to imagine you're all out doing exciting things, enjoying the weather, spending time with friends, maybe traveling, hopefully sipping a cool beverage (I'd say cocktail, but some of us are refraining these days).

Me? Well, let's just say I'm not enjoying a day off. No, I had to wake up much too early and go to work. And working on Saturday is rough. I spend my time sitting in an office, staring at a computer, thinking of everyone (you) having a grand ole time without me. Totally not fair.

So, remember Ben? His son's baptism is next month. The Husband will be his Godfather. We received our invitation yesterday and in the corner was a photo of Drake. My face lit up. Not only did I recognize the photo, but it was one I had taken during the Super Bowl party and, since then, it's become one of my absolute favorite photos.

Maybe it's silly to get so excited over seeing a picture I took on an invitation that is being sent to some friends and family, but I can't help myself. It was just so unexpected and... flattering.

This is Drake's sister. 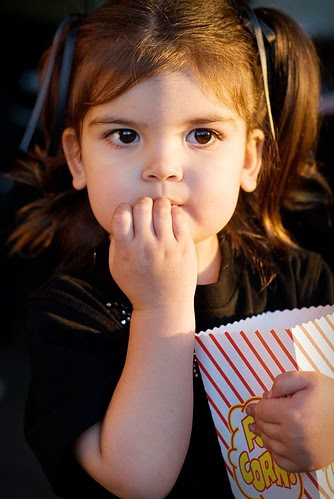 She loves popcorn.
Speaking of photography (I know, we weren't)... Peeps, I'm discouraged. I realize it's foolish to feel this way. It's not as if I've spent the past twenty years of my life pursuing something for which I've finally realized I posses no talent, but there's a nagging fear in the back of my head that keeps trying to convince me I'm not good enough, that if I had any talent, it wouldn't be such a struggle to learn and improve.

I need to stop feeling this way. I realize a big part of the problem is that I compare myself too often to real, live, professional photographers and that's not fair to myself. I know it will only serve to make me crazy, but I can't seem to stop. Doesn't a part of the learning process include studying other photographs? The composition, the light, the technique? Well, how does one do this without also seeing how one's own photographs suck compare?

I want to feel confident when I look at one of my own photographs and think "damn, that is a good shot" instead of "if so-and-so had taken that picture, it'd be amazing."

This is all a bit too heavy for a Saturday morning, isn't it?