Nine totally random and insignificant things I can tell you about this photo. 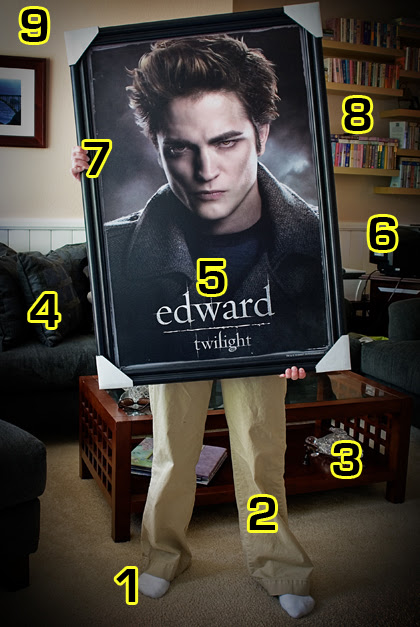 1. I'm a freak. I change socks three to four times a day. I can't stand it when my feet feel dirty and there's nothing better than fresh, clean socks. This is why I never wear flip-flops or sandals. I just can't handle it.

2. These pants are too big for me everywhere except my butt. It's a problem.

3. This is a glass turtle candy dish which remains empty because I find it impossible to leave candy in our apartment, untouched. Unless it's hard candy. But even then it's debatable that it'll stay around for very long. I have approximately nineteen turtles throughout our apartment and nearly all of them were given to me by my mother-in-law who is, apparently, trying to make up for the live turtles I gave up years ago.

4. We purchased these sofas shortly after we moved in four years ago. We have used them maybe six times. We don't entertain often and, when we do, everyone gathers around the television in the den. I picked this set because of the chaise. I imagined myself curling up in it and reading for hours. Yeah. Didn't happen.

5. I finally started reading a book that has nothing to do with Edward Cullen or Twilight. (I know.) The book is Birthright by Nora Roberts. The first three words in the book are "Douglas Edward Cullen" which is the name of one of the main characters. Weird, right?

6. I bought this little television to put in our dining room which is where I used to do most of my scrapbooking. I haven't scrapbooked in months years and now the TV sits on the corner of my desk because I like the background noise. Except you have to turn it on if you want background noise and I rarely do.

7. I hate my hands. I have fat, oddly shaped fingers and I pick at my cuticles relentlessly until they bleed. I bite my nails which means they're always jagged and uneven and I'm so embarrassed of them that I won't even get a manicure. Sigh.

8. I have had nine book shelves on this wall until one became unstable and I had to take it down to repair the wall. Apparently these shelves weren't mean to carry loads of heavy books. I took the shelf down five months ago. I still haven't repaired anything except to spackle the original holes. And all those books up there? All romance novels. 'Cause I'm a major sucker.

9. I painted this wall when we moved in. It runs along the entire length of our apartment, ending in our dining room. Every time I paint something I remember being seventeen and finally talking my parents into letting me paint my bedroom. I had the biggest room in the house (aside from the master, of course) and I spent an entire week painting my walls light pink. It was the prettiest color. It was so light that, in direct sunlight, you could barely see the tint of color, but at night deepened into this lovely light rose. After years of living with mismatched hand-me-down furniture (it sucks being the middle child), I finally had the bedroom of my dreams. Six months later, the landlord sold the house and we moved.

I've shared nine random things about me. You have to share at least one. Go.