The last twelve days of my life gone forever. 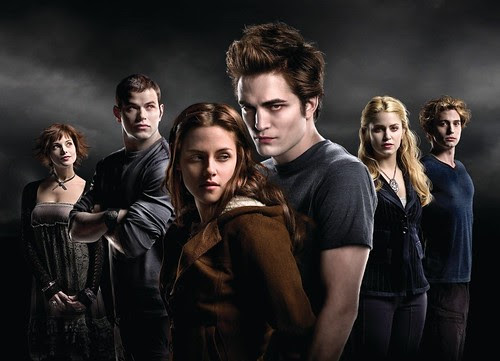 March 12: Borrow Twilight from J. Read first 30 pages. It was supposed to be a distraction. It would suffice. Meh.

March 14: Husband returns from self-imposed week of solitary confinement. We spend a relaxing evening in. Another two hundred pages read while he watches college basketball. It's a win-win.

March 16: Itching to see the movie. Decide to finish series first. I think I've been sucked in. I'm powerless to stop it.

March 17: St. Patrick's Day. Frustrated that I have a wedding to attend right after work. Who gets married at four p.m. on a Tuesday?! Sneak in a few pages of New Moon as soon as we get home late that night.

March 18: Read, read, read. I think I went to work. Can't be certain of anything at this point except that I. Am. Fucking. In love.

March 19: J has let a friend borrow Breaking Dawn, the fourth book. In a panic that she might not get it back in time, I rush out to purchase it. In hardcover. Because I'm going to want to own the series anyway. It doesn't matter that I still haven't finished the second book.

March 20: Arrive home from work at four. Jump in the shower and dry hair in preparation of a date with The Husband. Read until we leave. Finish New Moon. Tell Husband that I'm not starting the third book, Eclipse, until Monday. I need a break.

March 21: Devour first half of Eclipse.

March 22, 4:30pm: Take J to see Twilight. I can't resist. I have to see it while it's still being played in a Theatre. No force strong enough to keep my away.

March 22, 7:00pm: Stop at Target. Purchase Twilight DVD. Purchase Eclipse. In hardcover. Assure J that I am perfectly aware I'm obsessed and it's becoming a problem.

March 22, 7:30pm: Arrive home. Husband checks out my purchases, gives me an odd look. “Yes,” I say, almost challengingly, “It’s a problem. I’m aware. Now stay out of the bedroom for the next two hours.”

March 23: Read, read, read. I have a very vague recollection of folding laundry.

March 23, 1:45pm: Husband leaves for dentist appointment. Watch Twilight for a third time. Clear away all evidence that I was ever anywhere near the TV.

March 23, 4:00pm: Quick trip to Costco with The Husband. Purchase Twilight and New Moon to complete the series. Husband picks up some other items, like milk and cheese. I have a distant memory of eating these things myself once before.

March 23. 6:00pm: Finish Eclipse. Absorb first 150 pages of Breaking Dawn. Begin to cry as I realize I’m nearing the end. Contemplate sending threatening letters to the author in hopes that it will speed up publication of fifth book.

March 24, 6:30am: Wake up cranky, but can’t figure out why. Oh, that’s right. I have to go to work today. Which is the only thing keeping me away from Edward and Bella.

March 24, 9:00am: Contemplate turning in resignation so I can get back to reading.

March 24, 10:15am: Click on “publish” and wait for all readers to completely abandon me.