(Insert clever title here because I can't think of one.)

Is anyone else tired of seeing this guy's mug on the home page of Flickr? 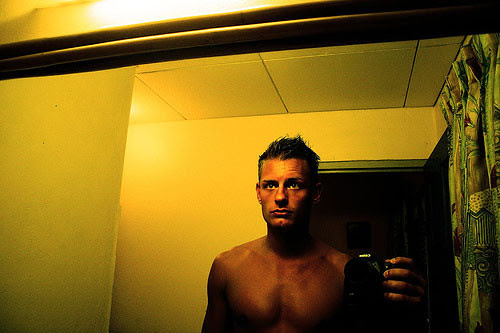 Tell me something. Are you a fan of the chin butt?

Me? Not so much. I realize a lot of girls dig it, but there's only one man who I think can get away with the chin butt and that's my next husband. 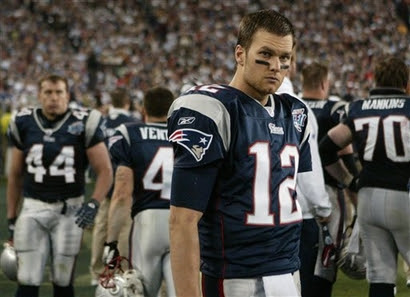 Sometimes I make myself laugh. The Husband is amazing at keeping a straight face. I say something funny, get the giggles before I even finish my sentence, and he maintains a blank stare and then tells me, "It's not funny if you laugh at your own joke."

And then I call him Debbie Downer. And I tell him not to get his panties in a twist. For some reason, this makes me laugh uncontrollably. 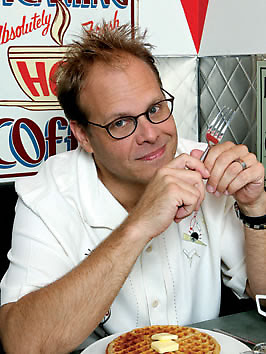 I'd almost be embarrassed to admit this. I am so completely infatuated with Alton Brown right now I don't know what to do with myself. In a book of his that I just recently paid full price for acquired, he says about his blueberry something-or-other recipe... "Sometimes I overindulge to the point of making myself ill... and I'm okay with that." And that's when I thought, we are so meant to be.

Besides, he can help me bake perfect cookies every time.

Ahh, cookies. Don't get me started. Last night I wanted to bake cookies so bad. And for no good reason except I wanted to use my new mixer, dang it. And my new-found baking knowledge that Alton has taught me from reading his book. Check it out if you want to learn how an egg can make or break your cookies or what happens when you whip cream. It's fascinating.

Another question. Do you prefer homemade whip cream? Or store bought? Or Cool Whip?

I prefer homemade when I'm being naughty.

Cool Whip is my nemesis. Seriously. Can't open a tub of the stuff without eating the entire thing. And the sad truth about it? I don't even like it that much.

However, several months ago I found this recipe on this much better blog and I made it and I was in love. It tastes just like Key Lime Pie, except I haven't had Key Lime Pie in forever, so I could be wrong, but it's really freaking delicious. I made it for my birthday back in September, when it was all hot out. This pie was so tart and sweet and cool and refreshing. And.

I totally can't find the recipe now. I think it goes like this: mix together a large tub of Cool whip, a can of frozen lime-aid, and a can of sweetened condensed milk. (I let everything defrost on the counter, but I don't think I was supposed to. It was easier to mix and still came out perfectly, so I recommend doing the same.)

Pour mixture into two graham cracker crusts (which I could totally eat plain) and freeze. Then eat a whole one buy yourself to make me feel better for doing the same not too long ago.

This totally made me laugh when I saw it over at Fussy's.

[youtube http://www.youtube.com/watch?v=nKoB8TPyHBo&fs=1&hl=en_US&rel=0]
You've probably already seen it. I am always the last to see everything. It's sad.

And, oh yes, you, too, will have that song stuck in your head for hours on end. Just like me. Except, for some unexplainable reason, every time I start singing it to myself (I'm alone a lot), I say "chocolate" instead of "popcorn." I don't do it intentionally. It just... comes out that way.

Eventually, I will poop chocolate.