Because now that it's here, I really just want to stay in bed.

In case you live under a rock, I feel it's my duty to tell you that there's this election tomorrow and it's kind of a big deal.

The Husband just e-mailed me to say "I don't know if you have any control over this, but there's a 'Yes on Prop 8' ad on your blog. Just thought I'd let you know."

So, Internet? Just to clear the air (because I feel this is necessary) (and, yes, I may be the only one), I am very much against Prop 8 and, despite my very passionate feelings for Barack, Proposition 8 may be the only thing forcing me to go stand in line for eighteen hours and vote like a good, upstanding citizen.

And I could sit here and rant and rave about EQUALITY FOR ALL and how it's ridiculous that people who have been given the right to believe in any religion they choose now think they can force others to live under those same beliefs, but let's face it. It's all been said before. And much more eloquently than I could ever hope to be.

By the way (and believe it or not), this fourteen-year-old is very much against Prop 8 as well. 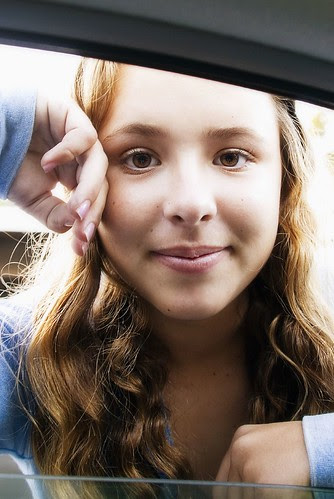 And if that photo could talk, she'd blister your ears with everything that's wrong with the proposition. And she'd flip you off if she saw you standing on the corner promoting 'Yes on 8.' And then she'd tell you how "ohmygod, how hot is Barack Obama?!" And how, in four years, she will be able to vote and she is soooo going to vote for Barack for a second term.

I have to stop talking politics or I really will go to bed tonight and stay there until Wednesday.